Having a survival kit at home is the most basic line of defense you can have against possible doomsday scenarios – the post-apocalyptic world, but what exactly would they look like? We’ve compiled a list of 8 scary doomsday scenarios where a carefully planned prepping kit would come in handy.

It’s never pleasant to think about doomsday scenarios or scary situations that could put us and our family in danger, let alone the entire world. We all like to think that we would always wake up to another dull day, but we had a rude awakening in 2020.

News broke out about the virus that’s killing people in China. Months later, it was killing friends and family – people that you know!

Even though we’d like to avoid the thought of them ever occurring, not being prepared would make them even worse to imagine. No words could describe the sheer horror.

Apocalypse scenarios are often a favorite movie theme. It’s a question that film fans have been debating for years. Are these films just entertainment, or do they contain a grain of truth?

There’s no denying that apocalyptic films are popular. When the world ends on the big screen, audiences can’t get enough. We love to see cities destroyed, loved ones lost, and society crumble.

So, how realistic is an apocalyptic film? It depends on who you ask. Some people believe that these films are far-fetched and unrealistic. But in the wake of the pandemic, humanity seems to be living in some apocalyptic film.

Every day, we are inundated by news about catastrophes occurring all over the world. With everything from pandemics to wars, we need to be more aware of our surroundings and the potential threats that would one day craft the new world and change our story.

This is a common theme that’s explored in movies as we see some of the world’s largest superpowers battling it out with each other.

With global politics always being such a sensitive topic, many people and scientists are legitimately worried about what would happen to human existence in the case of a nuclear war. Would it mean the apocalypse? Indeed, that can cause panic.

There are known massive stockpiles of these weapons in various places around the world and if they so happened to get into the hands of the wrong people, it would be a very possible doomsday scenario for the modern world.

A nuclear bomb exploding would result to result to an economic collapse of the world market.

When You Hear the Word “War,” What Do You Think of?

If you’re like most people, you probably think of destruction, death, and suffering. And while those are certainly all effects of war, there’s another effect that’s often overlooked: the effect on the rest of the world.

While a country is in turmoil, the rest of the world doesn’t just sit idly by and watch; the ripple effect of conflict can be felt in every corner of the globe. For example, the conflict between Russia and Ukraine has sent shockwaves through the global economy.

Gas prices spiked as trade routes were disrupted, and stock markets plunged as investors worried about the future. The conflict also took a toll on humanity: innocent civilians were caught in the crossfire, families were torn apart, and generations of hatred were stoked.

Of Course, Not All Effects of War Are Negative.

It can also be a catalyst for change, prompting nations to reassess their priorities and chart a new course for the future.

So next time you see a headline about a new conflict breaking out somewhere in the world, take a moment to consider its implications—not just for those directly involved, but for the rest of us as well.

We may not be able to stop every conflict from happening, but by understanding its effects we can hope to lessen its destruction and build a better future for humanity.

One of the possible apocalyptic scenarios would just be a larger scale of what we see occurring today when it comes to outbreaks of disease. Science is trying to cope, but there’s always that new virus that humanity isn’t prepared for.

In history, there have been cases of very serious illnesses wiping out millions of people, including the Spanish flu and the black plague.

There are always new pandemics to worry about and warnings from science experts that we all need to take heed of, and since we now travel globally and freely more than ever that threat becomes greater.

If just one of these diseases was to get out of control and couldn’t be managed, it could be a very real end-of-the-world scenario.

Overpopulation itself would not be the end of the world. But, the dramatic effects it would have on the world’s population could be.

The first time we began to fear overpopulation was in the 18th century when Thomas Malthas prophesized it would put a great strain on the planet and cause worldwide famine.

While this wouldn’t be as sudden of an ending to Earth as others, and there could potentially be a way to innovate around it, it’s certainly something to be wary of.

#5: Climate Shifts Due to Global Warming

Whether or not you believe in the threat of climate change, on a planet as sensitive and turbulent as Earth there’s a good chance that massive shifts could occur in sea level.

The effects of climate change are already being felt around the world. One of the most visible effects is the melting of glaciers and ice caps, which results in rising sea levels, flooding, and erosion in coastal areas.

There have also been increases in the intensity and frequency of extreme weather events, such as forest fire, hurricanes, and typhoons.

The worst-case scenario is that global climate change will cause the Earth’s climate to change so dramatically that it will result in various post-apocalyptic scenarios.

The Gulf Stream, for example, could stop flowing, causing Europe to become much colder. Or, the Amazon rainforest could start to die off, causing a decrease in rainfall and a rise in temperatures. It could mean a global food shortage.

Many scientists are fearful of the effects of climate change. And for countries where even a minor climate change could spell huge trouble, it’s even more concerning.

It might sound like a scene out of a sci-fi movie, but scientists claim that the possibility of super asteroids hitting Earth isn’t that far-fetched.

A huge space rock has the potential to destroy Earth or at least most of it. And it would be hard to tell when this horror of an apocalyptic event would occur.

Some scientists believe that it was an asteroid that wiped out the dinosaurs. So imagine how we humans would stand up against something so big. Being aware of every potential asteroid threat is impossible, which only adds further to the fear of the future.

But Can Asteroids Hit Earth?

Asteroids hitting Earth is more possible than you might think. It’s happened before and caused an ice age.

If an asteroid were to hit the earth today, we would have a much better chance of avoiding disaster thanks to science and technology. But, it would still be pretty scary, like something out of a movie.

And, while we often talk about the universe as being infinite, it’s pretty small when you think about the vast distances between planets and stars. So, while the chances of an asteroid hitting earth are pretty small, it’s not impossible.

And that’s something to keep in mind the next time you’re watching a sci-fi film set in space!

The universe is massive. There are billions of galaxies out there that were created after the Big Bang. It is relatively reasonable to assume that yes, aliens do exist.

One day, technology and science would prove that. And the rest will be history.

Numerous films have been created about an alien invasion. And here are some tips that you might want to take note of to survive an invasion:

Secondly, you would need supplies to protect yourself from the aliens. Some items that could be useful in this scenario include firearms, ammunition, and protective gear.

Finally, a prepping kit would help keep track of information and supplies during and after the invasion.

It’s common these days to see robots taking over or taking part in many of the functions we used to do for ourselves.

While it’s convenient to have this robotic help, some fear that their power will become greater than what we can control and lead to a doomsday-type scenario.

We’ll be unable to tell whether an artificial intelligence that becomes greater than the human mind will be with us or against us. And it’s this uncertainty that makes the threat a very scary and real one to consider. 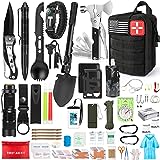 Movies like Deep Impact, Armageddon, and 2012 have featured natural disasters resulting in the apocalypse. The film The Day After Tomorrow shows how global warming could trigger a new Ice Age, which could result in tidal waves, fire, and other disasters.

Shifts in climate might be a sign that more natural disasters are coming. Or the mere fact that this planet we inhabit is always changing and surprising us.

Even a small-scale natural disaster can have a huge impact on a state or town. So, imagine the potential of something larger with a worldwide effect. Even the disappearance of bees could mean the end of the world for humans.

Imagine a world without bees. At first, it doesn’t sound so bad. But the truth is that life on Earth would be very different without bees.

For starters, about 75% of the world’s crops rely on pollination from bees. In addition, bees play an important role in the life cycle of many plants. As they collect nectar from flowers, they spread pollen and help to create new life.

Without bees, life as we know it would quickly start to unravel and potentially lead to extinction.

Most people think of the nuclear winter or the zombie apocalypse as a Hollywood invention, but there’s a kernel of truth to it. Scientists have long theorized that a zombie-like infection could spread like wildfire and cause humans to act like mindless animals.

If this were to happen, the best way to survive would be to have a well-stocked prepping kit. This would include items like food, water, weapons, and shelter. You would also need to know how to defend yourself and how to treat injuries.

Regardless of whether the end of human extinction is brought about by a nuclear holocaust or the rage virus resulting in the walking dead apocalypse, it is important to prepare and appreciate every moment that you still get to enjoy your life and present reality as you know it.