Looking to get into guns but embarrassed of not knowing much? This guns for dummies guide will help you get started.

Guns are a controversial issue both politically and socially in the US and elsewhere in the world, but this is a non-political, no judgment ‘guns for dummies’ guide for beginners to learn about guns. We won’t be passing judgment on whether or not people should own firearms and instead of welcoming anyone that wants to learn more.

Let’s focus on education. Knowledge is power, and learning about how guns work, how to use them safely, and what to consider when purchasing your first gun will make all the difference later in life. 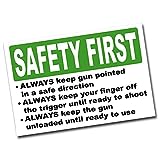 Regardless of how experienced you are with a firearm or what size gun you are using, everyone must follow a few safety rules every time you step foot on a range or hold a gun.

In addition to these general rules, which everyone should follow, firing ranges will have additional rules to keep everyone safe so be sure to learn them when you visit.

These definitions aren’t an exhaustive list and instead focus on essential parts of a gun.

Safety: The first part of the gun you should identify and make sure it’s turned on. It’s a small lever that blocks the gun’s trigger and keeps it from firing—usually located just above the trigger.

Barrel: The long metal tube that carries the bullet or projectile out of the gun. The longer the barrel, the more opportunity the bullet has to stabilize before it leaves the barrel.

Bolt Action: The action is a part of the gun that advances the next piece of ammunition. A gun with a bolt action will need to have the bolt, a piece of metal that sticks out from the body of the gun and can be pulled back and reset each time it’s fired.

Buttstock: On rifles and shotguns, it’s the part you put up against your shoulder when firing. It helps with recoil from the power of the shot.

Grip: The handle of the gun you hold in your dominant or primary hand to control it while firing. Larger guns like shotguns and rifles will also have a “pistol” grip to grasp for control, in addition to the buttstock that rests against your shoulder.

Magazine: Whether inside the handgun’s grip or attached on the outside, a magazine is a container that holds the ammunition. A magazine shouldn’t be confused with a clip, as a clip feeds the magazine.

Trigger: The lever under your pointer finger that, when pulled backward, starts the sequence to fire the ammunition. It’s usually a small curved piece of metal.

Guns for Dummies – How a Gun Works

For a gun to fire, two things must happen:

It’s important to note that ammunition is often wrongly called “bullets,” but a bullet is just the piece that passes through the target.

The correct term is a cartridge, either loaded directly into the gun or put into a magazine. The cartridge is the casing that contains: the primer, the bullet, and the powder that will explode in the gun and propel the cartridge forward.

Upon firing, the reaction works in the same way a car’s engine uses a spark plug to create movement.

The spark is caused when the firing pin hits the primer in the back of the cartridge, which lights the powder around the bullet. The gunpowder burning inside the casing creates pressure that forces the bullet out the end of the gun’s barrel at a high velocity.

After learning about guns, the next step you take may be to purchase your first gun and then the ammunition that goes with that gun. Not every firearm can use every type of ammunition.

There are a few decisions to make before you find a reputable gun shop to look for specifics. It’s generally advisable to buy your first gun in person rather than online so that you can ask questions and so you have a knowledgeable store owner to guide you.

There are three basic types of guns, and each type has a different set of positives and negatives. We’ll consider size, firing distance, recoil, and cost of ammunition.

Lightweight, small, and can quickly be fired with one hand.

The quick draw pistols in westerns are good examples of this type of gun, and where they shine in ease of use and the ability to carry them easily, they fail in range as their shorter barrels reduce their firing distance.

Glocks, available in full size and compact size, are good beginner guns that often show up at the firing range. Police and now the FBI both use 9mm Glock handguns as they have mild recoil; 9 mm ammunition is some of the cheapest ammunition available, and the gun can be carried or concealed.

The Winchester rifle, the .22 long hunting rifle, and the ArmaLite Rifle (commonly referred to in the news as the AR-15) are typical examples of different rifles that may already be familiar. All have barrels over 16 inches and rifling inside the barrel that causes the ammunition to spin.

Early Winchester rifles, as seen during WWI, were single-action rifles. Bolt action rifles need to have the bolt pulled back each time, such as guns like the Remington. Lastly, AR-15s fire with each pull of the trigger and automatically cycle to the next piece of ammunition.

All rifles require two hands to stabilize and shoot and have a buttstock that rests against the shoulder while firing. Rifles are for long distances, and they can hit targets up to 500 meters away.

The most common gun for hunters of small, quickly moving targets both on land and particularly in the air, such as skeet and sport shooting, require two hands to shoot but don’t always require to be placed against the shoulder like a rifle.

Shotguns were named after the ammunition (shotshell). They fire smaller shotgun shells filled with buckshot and larger projectiles called slugs. Either way, they fire smaller shots in a spread pattern to the larger, single bullet of the handgun or rifle. They are available in pump-action, bolt-action, and semi-automatic.

This type of gun sits between the handgun and the rifle in terms of firing distance but is powerful and far more imposing than a handgun. Due to their weight and long barrel, shotguns can be challenging to move in small spaces.

Guns for Dummies – The Bottom Line

174 Reviews
The Gun Guide for People who Know Nothing About Firearms
$7.99
Buy on Amazon

Choosing your first gun will become a lot easier if, along with knowing your local gun ownership laws, you also know the gun basics, terms and have an idea of what type of gun you wish to purchase and why you need it. With the basics covered in this guide, you’re already well on your way to making an informed choice.

Now, if you choose to buy your first gun, you can find a reputable gun store, ask lots of questions and be safe in your beginner knowledge, then be ready to learn even more.